In the past two decades – finally – people are getting concerned with the overuse of antibiotics.

When mainstream media, the conventional medical community, and holistic practitioners are all on the same page…you know the issue is serious!

When You Take a Good Thing Too Far

Alexander Fleming discovered penicillin in 1928. Since then, antibiotics have saved countless lives, remained a powerful weapon against infection, and prevented the spread of many diseases since they became available to the public in the forties.1

However, what should have remained a last resort option (when natural remedies such as sunshine and soapy water weren’t working), became the reflex answer to everything. Antibiotics were mass-prescribed and utilized in many aspects of daily life without thinking about the future.

The exposure to such massive amounts of antibiotics had a very real effect on the bacteria. These dangerous organisms mutated, adapted, and became immune to the only thing we had to beat them. The overuse of antibiotics has created a very real ripple effect in the overall health of mankind. It’s a scientifically proven fact. 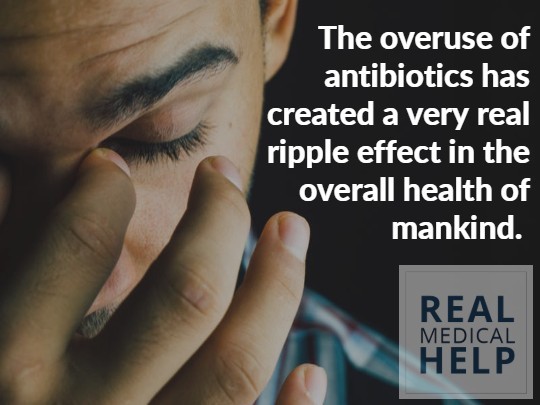 The researchers at Mayo Clinic explained, “If you take an antibiotic when you actually have a viral infection, the antibiotic is still attacking bacteria in your body — bacteria that are either beneficial or at least not causing disease. This misdirected treatment can then promote antibiotic-resistant properties in harmless bacteria that can be shared with other bacteria.”2

They go on to point out that colds, flus, bronchitis, stomach flu, as well as most coughs, sore throats, ear infections, and sinus infections will not benefit from antibiotics anyway. These conditions are typically viral in nature and antibiotics won’t help.

That unnecessary antibiotics are proven to damage the good (harmless) bacteria inside you should be a wake-up call to all of us. Without beneficial gut flora, your entire body can end up compromised. These bacteria are an important element of your immune system.

Antibiotic-resistant “superbugs” may seem like sci-fi thriller…but it’s real and already happening all over the world.

Drugs that once worked effectively aren’t as powerful. Some antibiotics no longer work at all when faced with specific bacterial strains. More such strains are discovered every year.

Here are just a few…

The U.S. Centers for Disease Control and Prevention (CDC) states, “Each year in the United States, at least 2 million people become infected with bacteria that are resistant to antibiotics and at least 23,000 people die each year as a direct result of these infections.”3

An infection that doesn’t respond to antibiotics means a much worse situation. You could be sick for longer, end up with a permanent disability, the costs of care skyrocket, and if nothing works to treat the superbug, it could even take your life.

Minimize Antibiotic Overuse in Your Life

It isn’t just doctors and hospitals at fault here.

In the 90s, the “antibacterial craze” exploded into the marketplace and those products made their way into our homes and businesses.

The overuse of antibacterial products (soap, lotion, baby wipes, and cleaning products) and misuse of antibiotics in our food supply (primarily in commercially raised cattle) have hastened us toward a worrisome future where antibiotics no longer work at all.

Choosing organic (grass-fed or free range) cattle, poultry, and the products made from them is beneficial on many levels. Not only are the products more nutritious, they aren’t being pumped full of antibiotics or grown hormones that the human body absolutely doesn’t need. They’re not being fed GMO feed covered in pesticides.

Every year, 14,440 tons of antibiotics are administered to livestock in the United States.

No one wants to feel sick. You play an important role in reducing antibiotic overuse that results in resistant superbugs before it’s too late. Though you may want quick relief from symptoms you’re experiencing, antibiotics are simply not always the answer. Long-term, they’re certainly not the best answer for your body.4

Headlines such as this one from the United Kingdom’s Telegraph, “First new antibiotic in 30 years discovered in major breakthrough” show the seriousness of the situation worldwide.6

You and the people you love must safeguard yourselves against the overuse of antibiotics before you go through the nightmare of an antibiotic-resistant infection.

1 National Institute of Allergy and Infectious Diseases: Antimicrobial (Drug) Resistance
2 Mayo Clinic: Antibiotics: Are you misusing them?
3 U.S. Centers for Disease Control and Prevention: Antibiotic / Antimicrobial Resistance
4 Consumer Reports: The dangers of antibiotic overuse you should worry about
5 Healthline: With 70 Percent of Americans on Medication, Have We Become a Pill Culture?
6The Telegraph: First new antibiotic in 30 years discovered in major breakthrough

Pomegranates are messy, sometimes hard to find at your grocer (they’re primarily in season September to January), and tend to be more expensive than a peach or apple. However, the proven heart health benefits of pomegranates might just make this a purchase you want to consider anyway.Pomegranates are delicious but can be awkward to eat. The seeds ...