Balance Your Hormone Levels With Food.

In today’s world, we’re inundated with “fake” hormones that mimic the ones our bodies produce naturally. When your hormones are too high or too low, you can feel like a stranger in your own skin. Maintaining a balance of hormone levels is critical to health and well-being.

The hormones in your body are chemical compounds manufactured by an endocrine gland. They have a specific effect on how other organs perform. These helpers travel the bloodstream, making necessary alterations to bodily functions and regulating many of your vital systems.

The human body regulates these hormones naturally but outside forces can disrupt this natural system. Chronic stress, drug interactions, poor diet, unhealthy lifestyle choices, a buildup of toxic substances, or malfunctions in the pituitary gland or ovaries can cause the body to create too many hormones or suppress their production. 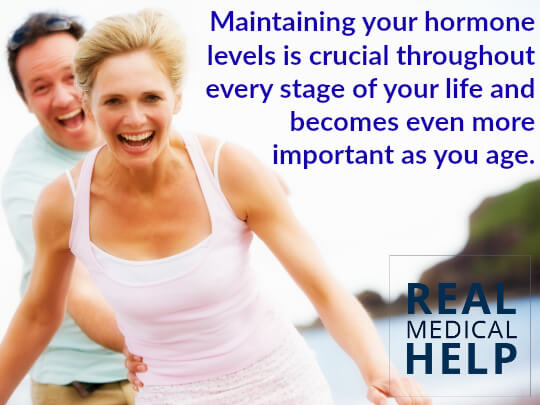 Without them, your body can feel “off” but you might be unable to explain why. The symptoms of low hormone levels are similar to many unrelated conditions.

As a result, hormone deficiency is often misdiagnosed and left untreated. These side effects of too few hormones are extremely common. Here are some of the most-reported symptoms for both men and women making too little of their primary hormones.

Too many hormones in the body can cause side effects that are embarrassing as well as dangerous to your health. This may be caused by a physical or clinical malfunction or by foods or habits that throw your body’s production out of balance.

The foods you eat can mean the difference between overwhelming symptoms or a peaceful existence that is safe and trauma-free. Maintaining adequate hormone levels is crucial throughout every stage of life and becomes increasingly important as we age.

The key is balance.

Hormonal birth control and hormone replacement therapy (HRT) may help women with standard menstrual disorders, perimenopause, and menopause. However, the side effects can be detrimental to long-term health and increase your risk of heart disease, stroke, and cancer.6

If you’re taking these prescriptions and also getting unknown compounds in your diet or environment that mimic female hormones, your body might be getting too much. There are more than 3,000 compounds added to our food supply and a large majority of those are not good for the human body or hormone balance.

Dr. Holly Lucille is a naturopathic doctor who says rampant hormone imbalances – known as cases of “estrogen dominance” – are behind many of our most common health conditions like cancer. She explains, “Estrogen’s message is to tell cells to grow and proliferate. That’s great when it’s initiating puberty in a young girl [but not] if you’ve got proliferating tissue like uterine fibroids, ovarian cysts, endometriosis, breast cancer, or prostate cancer.” 7

She adds, “In the estrogen dominant situation, cruciferous vegetables are full of compounds that can actually help the liver detoxify estrogen appropriately.” Her recipe for hormone health includes an organic diet, removal of processed foods, and avoidance of common chemical toxins.

Just as there are foods that balance hormones, your exposure to too many hormone-mimicking substances such as estrogenic foods must also be curbed.

Increased consumption of foods rich in vitamin C has been proven to fight cancer and improve overall health. When molecules become unstable due to damage or mutation, vitamin C is considered a “universal donor” – able to contribute molecules to reestablish molecule stability.

In one study conducted published in Radiation Physics and Chemistry journal, researchers found that vitamin C stimulated almost 100% regeneration of estrone (estrogen), more than 50% of progesterone, and almost 60% of testosterone. 8

Those involved in the study are hopeful that this will lead them to an alternative treatment to hormone replacement therapy, synthetic hormones that increase cancer risk after just a few years of use. HRTs are also implicated in a higher risk of stroke and sudden death.

Vitamin C can be taken at high doses safely and is beneficial in many ways to overall human health, including strengthened immunity, preserved vision, anti-aging, and protection against heart disease.9

You don’t have to feel like a stranger in your own body anymore. Strange symptoms you can’t explain may be due to hormone imbalance. Talk to your doctor about testing. If your hormone levels are off, there are natural ways to bring them back into balance.

The Effects of Artificial Sweeteners on Your Health

I know. I know. You’ve heard it all before. Fake sugar is bad for you...but do you know why? These chemical additives mimic the sweetness of sugar without the calories. They’re synthetic products that your body interprets as many times sweeter than sugar. The effects of artificial sweeteners has been the source of intense debate for over ...