Can You Reverse the Dangers of Smoking with Vitamin D? - Real Medical Help

Can You Reverse the Dangers of Smoking with Vitamin D?

Every person in the developed world should know (by now) how bad smoking is for you. If you’re a smoker, you already know that quitting is critical to your health and life. Preaching about the dangers of smoking (and other forms of tobacco use) is not my goal here because the facts are scientifically proven. There is zero doubt about the toll smoking takes on your health.

Just in case you need a refresher – though I know you don’t – here are a few quick facts.

If you are a smoker now or have been one in the past, it can feel incredibly isolating in the modern world. I’ve known many smokers (friends, family, co-workers) over the years and some of them try again and again and again to quit without success.

Even the strongest can fail five times, ten times, or more to kick the habit. Some manage to quit only to return to the habit weeks, months, or years later.

For those who have never had the misfortune of picking up the dangerous and expensive habit (or another physical addiction – such as drugs or alcohol), it can be hard to empathize.

Because tobacco products are legal (like alcohol), those who can’t or won’t quit are regarded as weak or willfully ignorant. They receive advice on the dangers of smoking from the well-meaning (but ultimately disapproving and judgmental) people in their lives as well as strangers.

Smoking is the one addiction where strangers feel entitled – even obligated – to campaign for you to quit in both private and public.

Even if you’re what’s thought to be a “considerate” smoker (someone who smokes away from others, avoids smoking near children, doesn’t leave their butts all over the place, and doesn’t engage in their habit around non-smokers or former smokers), you are not immune from the condemnation. The looks, the mumbled criticism, or the direct confrontation.

Criticizing the mental, emotional, and physical habits of others is easy to do today with the explosion of social media but there is (still) no way to understand the struggles another person may be dealing with unless you are in their shoes.

There are plenty of intelligent and otherwise sensical people who smoke. Scientists have stated (time and time again) that tobacco use is rooted in chemical dependency.

Tobacco products are designed to get you hooked and tobacco companies have invested millions in research and development for decades to get (and keep) new customers.

They’ve also invested millions in fighting the lawsuits resulting from many millions of deaths and ruined lives. At the end of the day, they’re no different than the drug cartels, creating a product intended to get people addicted and continuing to supply that addiction.

It’s a profitable venture, well worth their investment in fighting horrific class action lawsuits brought by the surviving families of people killed by tobacco use. 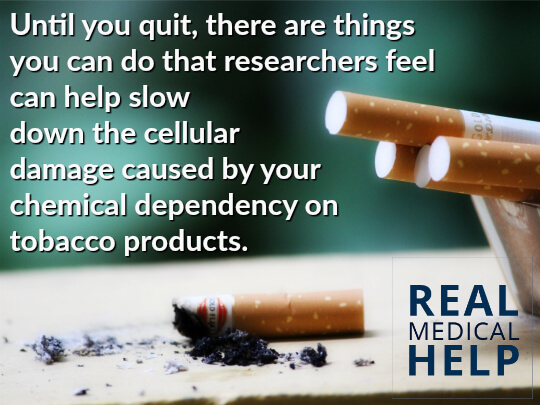 Once you’re hooked on tobacco – just like alcohol or cocaine or prescription drugs – it’s a fight to break the habit. For some, the lucky few, it’s a habit they can quit once and never return to again. For others, the majority of smokers according to statistics, it takes several attempts (and failures) to finally kick it. There are some who never do.

I’ve seen men and women on oxygen tanks with emphysema who continue to smoke! If that isn’t the very essence of addictive behavior, I don’t know what is!

Every chemical addiction must be treated as an addiction – not blamed on the user’s “willful ignorance” because they simply want to keep smoking. These companies are making billions filling their product with addictive chemicals and carcinogens that are unnecessary.

Bring on the Vitamin D!

Nothing will protect your body (and your life) from the dangers of smoking as well as never smoking at all or quitting successfully. That’s a fact.

For those struggling to quit, any method that can protect your body (even marginally) from the toll tobacco takes should be utilized to minimize the damage as much as possible.

Let’s talk about safeguarding your overall health – particularly your lungs – while you fight the chemical dependency that is tobacco addiction.

Vitamin D is crucial to your body to maintain bone strength, protect your heart, fight infection, improve mood or behavioral disorders, lower inflammation, and drastically decrease your risk of serious diseases such as diabetes and cancer.4

Scientists with Channing Laboratory – Brigham and Women’s Hospital found that participants in their 20-year study who tested for poor lung function were also vitamin D deficient while those who had sufficient quantities of the vitamin exhibited better lung function over time.5

They theorized that the anti-inflammatory and powerful antioxidant properties of vitamin D played a role in lung protection for smokers.

Since the 2012 publishing of their findings in the American Journal of Respiratory and Critical Care Medicine, other researchers have confirmed their results.

The biggest danger of smoking is that it’s known to be incredibly pro-inflammatory. This increases the oxidative stress your body copes with day to day. Not having enough vitamin D can lead to difficulty sleeping, problems with digestion, and negative impact to sexual libido.

That’s before you consider the damaging long-term effects smoking has on your internal organs.

Make No Mistake – Smoking is Still Damaging to Your Cells!

If you’re struggling to quit, do everything you can to slow down the danger smoking poses to your cells. The American Cancer Society states, “Approximately half of all smokers will die from the habit. Smoking cigarettes kills more Americans than alcohol, car accidents, HIV, guns, and illegal drugs combined.”6

Until you quit, here are a few tips that researchers feel can help slow down the cellular damage caused by your chemical dependency on tobacco products.

No one should ever assume that quitting smoking is easy. Despite the dangers of smoking, it’s an addiction that isn’t easy to shake. One study with the University of Toronto estimated it could take as many as 30 attempts to quit smoking before you’re successful. Even the more conservative CDC and American Cancer Society estimate 8-10 attempts before it works.8

When you ultimately quit, your body is going to work hard to repair the toll smoking has taken on every cell inside you. After that last cigarette, you’re going to feel, see, and even taste major improvements within minutes, hours, days, weeks, and years.

Within ONE DAY of Quitting Smoking...

Every minute, every day, every week, every month, every year you continue not using tobacco, your body gradually repairs the damage caused by tobacco use. Slowly normalizes and balances your body – even after years of exposure to the dangers of smoking in your life.

The fight is worth it! Keep trying to quit...even if you fail again and again. Each time you fail, you increase your risk of success the next time.

Take it one day at a time and do what you can in the meantime to protect your body.

Your body really, truly needs rest. Allowing your body to get much-needed sleep benefits you now and well into the future. Research has shown that sleep deficiency substantially raises your personal risk of heart disease, diabetes, obesity, mental disorders, and premature death. 1Chronic sleep deprivation affects more than 40 million adults in the ...