Loneliness and Health – The Scientific Connection

The connection between loneliness and health is one that concerns researchers around the world. It’s considered a public health issue for the older population over the age of sixty and is rapidly becoming a plague in the younger generations as well. Loneliness directly impacts quality of life (for people of all ages) and increases overall health complaints such as chronic pain, depression, and systemic inflammation.1

The concept of loneliness can be rather abstract. What does it mean to be lonely? It’s a complex and extremely individual feeling that may or may not include isolation. It’s not the same as “solitude” – which many people seek for various reasons.

Loneliness doesn’t inspire positive feelings. One can be “alone” and not “lonely” – just as one can be in a room full of people and feel more alone than ever. Mother Teresa said, “Loneliness and the feeling of being unwanted is the most terrible poverty.”

The Growing Epidemic of Loneliness

Despite living on a relatively small planet with 7 billion other people, loneliness is all too common. Even though we’re more technologically “connected” than ever before, more people report being lonely than ever before and it should trouble all of us.2

The dangers posed by loneliness to health are only beginning to be understood.

In a study conducted by Cigna that examined the “social media paradox,” Douglas Nemecek, MD explained, “Loneliness has the same impact on mortality as smoking 15 cigarettes a day, making it even more dangerous than obesity.”3

The state of long-term loneliness has the ability to alter you at the cellular level that leads to a higher risk of disease and early mortality. During a ten-year study, researchers with Clemson University and the University of Chicago wrote, “The fact that loneliness continues to predict health outcomes when health behaviors are held constant suggests that loneliness alters physiology at a more fundamental level.”4

The effect of loneliness on health needs more coverage. Chair of preventative medicine at Cleveland Clinic, Dr. Richard Lang, stated that addressing loneliness is as critical as addressing your nutrition, exercise, and sleep.5

Current estimates by the AARP’s Loneliness Study suggest more than 42 million Americans over the age of 45 are affected by chronic loneliness.6

A major aspect of our humanity is socialization. It’s wired into us at the cellular level. We may be connected at an astronomical rate due to modern technology…but are we connecting?

University of Chicago’s Center for Cognitive and Social Neuroscience director John Cacioppo has been studying the effects of loneliness on health for two decades. He explains that loneliness (in moderation) can be beneficial to how we interact with others. Too much is dangerous because your body interprets it in the same way it does hunger, thirst, or pain.7

Your body enters “fight or flight” mode to save itself. The internal chemical effects of these reactions ramp up the stress and aging done to your body.

On mental and emotional level, Isolation and loneliness devastate the human mind and spirit. It’s difficult to approach loneliness “logically” when negative emotions are out of control.

The epidemic of chronic loneliness may provide more insight into rising suicide rates. The U.S. Centers for Disease Control and Prevention (CDC) explains that 45,000 people take their own lives annually in the United States alone – approximately 54% of those who died did not have a known mental health condition.8

Every 40 seconds, someone commits suicide in the United States, making it the 10th leading cause of death for everyone over the age of 10. That’s not including the nearly 500,000 suicide attempts that occur annually.

A 12-year collaborative study between Brigham and Women’s Hospital and Harvard Medical School found that participants with the highest levels of loneliness showed a 20% faster rate of cognitive decline than participants who didn’t report feelings of loneliness.9

It’s when loneliness becomes chronic that problems arise. Trouble moving on after a traumatic loss or life change can spur feelings of isolation and loneliness. The stigma of mental and emotional trouble prevents many from seeking help or even talking to someone about how they feel.

We need other people.

Even if you don’t consider yourself a “people person,” it’s crucial to interact at some level with others. Much like the stress response, loneliness is your body’s way of telling you to pay attention. 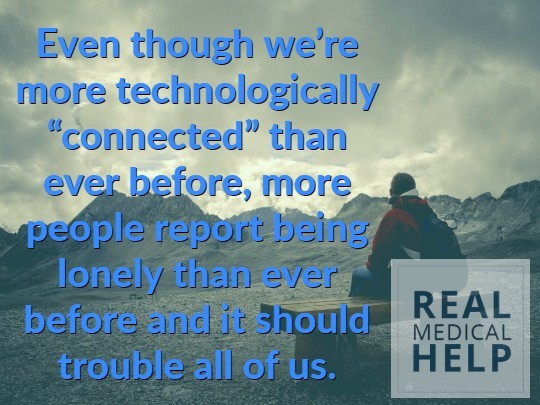 The effect of loneliness on health is shockingly clear. Being lonely won’t kill you…but it creates ideal conditions for other health problems – heart disease, diabetes, cancer, dementia – that can if left unchecked or ignored.

Be good to yourself. Don’t ignore it. Move around, connect with others, distract your mind, and fight your way through it. If you get to a serious low point, call for help. You are not alone.

“What should young people do with their lives today? Many things, obviously. But the most daring thing is to create stable communities in which the terrible disease of loneliness can be cured.” – Kurt Vonnegut

Use Your Mind to Control Stress & Depression

7 Tips to Survive the Holiday Blues

How Beneficial is Lifting Weights?

Adding the right foods to your diet to protect brain health will keep you sharp for decades to come. DIET is critical to overall health and this is particularly true when it comes to the most complex organ in your body.The Standard American Diet (commonly referred to as the Western diet) has deteriorated badly in the past forty years. Fake foods ...