Adding the right foods to your diet to protect brain health will keep you sharp for decades to come. DIET is critical to overall health and this is particularly true when it comes to the most complex organ in your body.

The Standard American Diet (commonly referred to as the Western diet) has deteriorated badly in the past forty years. Fake foods from manufacturers are packed with sugar, simple carbohydrates, and chemicals you can’t pronounce (in the name of convenience).

At the same time, the mainstream medical community decided that fat was a wicked, wicked substance that needed to be purged from your plate entirely. Suddenly, eggs and butter were “bad for you” while highly inflammatory margarine and hydrogenated oils were all the rage.

Our health is wildly out of control in many areas. We might be living longer but our quality of life is degrading. This isn’t an opinion. Scientific studies have proven it time and time again. Here are some quotes from publications around the world…

“America's health crisis is the result of greedy corporations and their reckless practices. The US life expectancy is slipping further and further behind other high-income countries.” CNN3

“Lifespan is increasing while health span – the number of years of life lived free of serious disease – seems to be decreasing.” Psychology Today4

“Americans’ health is declining and millions of middle-age workers face the prospect of shorter, and less active, retirements than their parents enjoyed.” Bloomberg5

Unfortunately, a large portion of the American population eats poorly, maintains a sedentary lifestyle, and practices damaging lifestyle habits that are taking a toll on every cell in your body. Other high-income countries that live like we do are in the same boat.

Your brain is paying the price.6 The World Health Organization reports that 50 million currently live with dementia and the numbers are rising rapidly.7

A study published in the medical journal Cerebrum stated, “Diet is one of the most important targets for lifestyle modification to prevent Alzheimer’s disease. Many people still blindly follow the Standard American Diet, or SAD. According to the US Government, about 75 percent of all Americans do not consume an adequate amount of vegetables and fruits, while most exceed the recommended amount of sugars, saturated fats, sodium, and calories. Studies show that rejecting SAD may be critical in the fight against AD.”8

To protect brain health, you need to incorporate a few powerful foods that offer excellent fuel. Yes, you can go the supplement route (and many do) but your body may or may not absorb them depending on quality and delivery system. 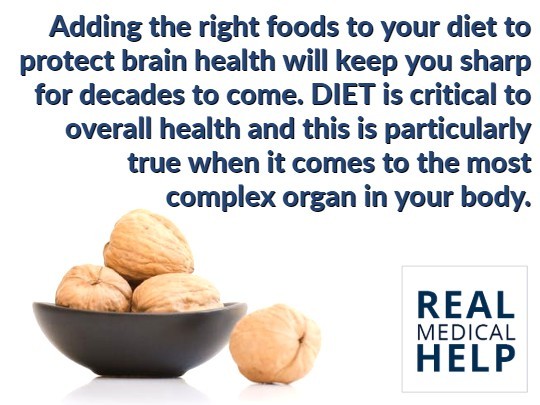 Your body always knows what to do with food!

The Mayo Clinic reported, “Supplements aren't intended to substitute for food. They can't replicate all the nutrients and benefits of whole foods, such as fruits and vegetables. Whole foods offer three main benefits over dietary supplements: greater nutrition, essential fiber, and protective substances.”9

Adding the right foods to your diet does more than protect your brain. Every other cell in your body benefits from a plate packed with real, whole foods and abundant nutrition and other lifestyle or health changes you make.

Scientists around the world agree that DIET is the key to enjoying a long life of youthful cognition. It’s never too late to add some brain-friendly foods to your eating plan!

You Need the Benefits of Chai Tea in Your Life!

Have you enjoyed the benefits of chai tea? If not, it’s time to give this delicious beverage a chance! It can be ordered in most coffee shops or you can make it yourself at home.It’s the ingredients in chai tea that make it so good for you. You already know how good tea is for your body (head to toe) but you might not know how much your system ...