Stop a Heart Attack With a Little Heat

Knowing how to stop a heart attack is more critical today than ever before! According to the U.S. Centers for Disease Control and Prevention, there’s a heart attack every 40 seconds. It generates more than $200 billion in health expenses annually. 1

Heart disease remains the leading cause of death for both men and women in the world.

There’s a common herb (likely in your spice cabinet right now) that has the power to stop a heart attack in progress! The herb, most often referred to as a spice, has been shown effective within 3 minutes of consuming it without damaging the heart muscle.

Cayenne pepper (Capsicum annuum) has been used by medical practitioners since ancient times and is still considered a powerful helper of your heart today. Cayenne and other hot peppers (such as bird, chili, and Tabasco) have a high content of a compound called capsaicin.

Capsaicin is one of seven critical substances found in peppers. It is what makes peppers hot and what provides the outstanding health benefits.2

Dr. John Christopher was a renowned herbalist who recommended a glass of cayenne tea every 15 minutes until a heart event subsides.

He once wrote, “In 35 years of practice, I have never lost one heart attack patient. If they are still breathing, I pour down them a cup of cayenne tea (a teaspoon of cayenne in a cup of hot water), and within minutes they are up and around. The warm tea is faster working than tablets, capsules, cold tea, because the warm tea opens up the cell structure. It goes directly to the heart, through the artery system. Cayenne is a certain remedy for heart attack. As a stimulant, it can start the heart into action again, and as it facilitates blood flow throughout the body, it will keep the heart going."3

In the September 2009 edition of the journal Circulation, Keith Jones, PhD and a group of researchers from the Department of Pharmacology and Cell Biophysics at the University of Cincinnati announced findings which shed new light on capsaicin’s relationship to heart function.

This information gives credence to Dr. Christopher’s anecdotal reporting, and takes capsaicin’s near-miraculous effects to the level of evidence-based medicine.

Dr. Jones’ team found that applying capsaicin to the stomachs of mice caused sensory nerves in the skin to trigger signals in the nervous system which activate cellular “pro-survival” pathways in the heart, reducing cardiac cell death by 85%.

Apparently, skin - the largest organ of the human body – has evolved to protect animals, including humans, in a variety of ways. The researchers also found that a small incision made on the abdomen triggered an 81% reduction in cell death.

“Topical capsaicin has no known serious adverse effects and could be easily applied in an ambulance or emergency room setting [or by anyone present including the victim] well in advance of coronary tissue death. If proven effective in humans, this therapy has the potential to reduce injury and/or death in the event of a coronary blockage, thereby reducing the extent and consequences of heart attack.”

They went on to explain,

“Both this and the capsaicin effect are shown to work through similar neurological mechanisms. These are the most powerful cardio-protective effects recorded to date. This is a form of remote cardio-protection, using a skin stimulus that activates cardio-protection long before the blocked coronary artery is opened.

All the current interventions require the vessel to be opened before doctors can act, and since it takes time to elicit protection, tissue dies. This treatment will protect the heart before the vessel is opened while producing a strong protective effect that is already active when we open the vessel.”

The team then concluded,

“By activating these sensors in the nervous system, via skin, we think that a response to preserve and protect the heart is triggered. This technique is fooling the body into sending out protective signals. This may be similar to the way certain acupuncture treatments work; there may be a neurological basis."

"In a broad sense, this work may provide a ‘Rosetta stone’ for translating alternative medicine techniques like acupuncture to Western medicine. Perhaps we can understand the biological mechanisms of how alternative treatments may be successful for patients."

"This could help create favorable outcomes for those who are experiencing stroke, shock, or are in need of an organ transplant, and the best part is that it is done non-invasively and is relatively inexpensive.”4

In addition to the ability to stop a heart attack and alleviate tissue damage from a cardiac event, this miraculous herb has a wide range of other healing benefits.

To stop a heart attack, Dr. Christopher used to recommend 1 teaspoon of cayenne pepper in a cup of hot water every 15 minutes until the crisis passes

The chief botanist on the David Livingstone Expedition was the first to discover the beneficial Ouabain plant heart activity of the West African plant Strophanthus gratus.

He brought the plant to Europe in 1862 and it was used to treat heart disease in Germany as early as 1906.

Early on, many German physicians recognized the powerful beneficial effects of this plant medicine, which is now referred to as g-strophanthin (stro-FAN-thin) and its byproduct ouabain. 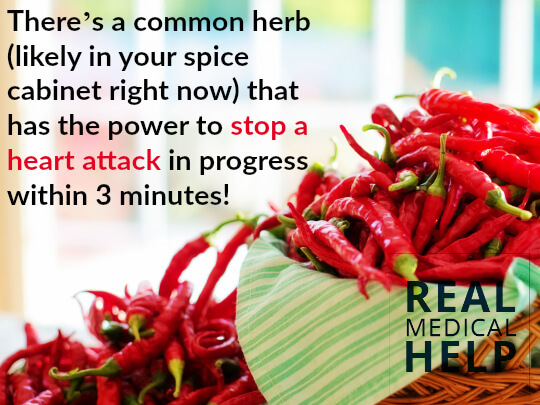 Unfortunately, because of Germany’s political and scientific segregation before and during WWII, this valuable heart medicine became isolated from the rest of the world.

Strophanthin has a chemical structure similar to digitalis, a commonly-prescribed heart medication derived from the foxglove plant (D. purpurea).

While both medications strengthen the heart, one important pharmacological difference is that strophanthin has a deacidifying effect on the heart muscle– which makes it extremely effective both in preventing heart attacks and stopping a heart attack already in progress. 5

Another German study of 150 patients with severe heart disease, who collectively had experienced 254 heart attacks, demonstrated an 85% success rate in preventing further attacks.

The study coordinator remarked, “A positive result was registered when the severe heart attack abated within five minutes after the g-strophanthin capsule was bitten through, and after ten minutes at the latest, they disappeared completely.”

At present, there are approximately 5,000 German physicians using and prescribing oral strophanthin.

A recent booklet (available in German only) gives the results of a survey of 3,645 German physicians who offered statements on their use of strophanthin between the years 1976-1983. Of the doctors interviewed, 3,552 offered exclusively positive testimony with no reservations. None of the physicians gave a negative response.6

The cost of strophanthin, which is currently available to German physicians and their patients, is about USD $30 per month. It is possible to obtain this product from Germany with a prescription from a physician in your country.

For those living outside of Germany, there are several strategies for obtaining strophanthin, depending upon where you live. A German pharmacy (apotheke) can be located through an international telephone operator. Call the pharmacy to arrange delivery by mail. Also, you can arrange for someone traveling to Germany to bring back the drug.

Be sure your country’s customs permit these arrangements.

If you currently have heart problems or know someone who does, take a few minutes and put some cayenne in a capsule or put a teaspoon or two in a small baggy and keep it in your purse or wallet. You truly never know when this powerful hot herb will come in handy!

A word of caution: although allergic reactions to cayenne are rare, take a small sample first before starting a regimen. If you are tolerant to it, consider it your “first response” to stop a heart attack while you seek medical attention.

Doctors Use This Secret Book of Alternative Medicine

The Amazing Benefits of Copper – A Natural Antibiotic

If you’re remotely “plugged in” to health and wellness news, you’ve probably heard a lot of debate about the safety and/or dangers of GMO foods. Dr. Joseph Mercola stated, “The claim that GE foods are materially comparable to conventional foods, ...