The Effects of Artificial Sweeteners on Your Health - Real Medical Help

The Effects of Artificial Sweeteners on Your Health

I know. I know. You’ve heard it all before. Fake sugar is bad for you...but do you know why? These chemical additives mimic the sweetness of sugar without the calories. They’re synthetic products that your body interprets as many times sweeter than sugar. The effects of artificial sweeteners has been the source of intense debate for over 100 years.

The History of Fake Sugar

Back in 1879, saccharin was discovered in a lab at Johns Hopkins University. They weren’t trying to make an artificial sweetener. They were trying to make derivatives of tar. The chemical byproduct on one of the researcher’s hands was transferred to his cigarette and he realized it was sweet.

It was a cheap alternative to pricey sugar and food manufacturers pounced on it as a way to sweeten foods for less money. It was used for years without consumer knowledge. Where sugar was a rationed food during wartime (being crop dependent), saccharin was a lab creation that made it unlimited.

In the latter part of the twentieth century, mass-produced foods using saccharine hit market shelves with weight loss as the primary marketing gimmick. Though there was no actual evidence to prove that using artificial sweeteners resulted in weight loss, the American population quickly became hooked.

Several varieties are out now – a new one is released every decade or so – and consumers tend to jump on the “enjoy your sweets without the calories” bandwagon. Despite there being a distinct lack of (unbiased) scientific evidence proving its’ safety or long-term effects.

Consumers have proven (with their buying power) for decades that they don’t care.

Before we talk about the effects of artificial sweeteners, perhaps we need to talk about why these products are so popular. Why is there even a need for them? Also, these products must be better for you than evil refined sugars, right?

The Arguments for Fake Sugar

When it isn’t “real” sugar, we feel like we’re sneaking something past the “diet police.”

Reports put average sugar consumption in the United States at about 130 pounds annually, per person.1  We’re eating too many sweets, drinking too many sweets, and getting fatter as a nation every year. Two-thirds of the population in the U.S. is overweight or obese.2  Our rate of disease is higher than ever before and rising rapidly with the obesity epidemic.

Interestingly, the spike in obesity and disease began with the introduction of fake food. Fake butter, fake sugar, fake oils, and fake meat meant to taste better, look better, last longer, and cost less was also marketed as being healthier for you.

The late 1960s was the birth of the consumer marketing that we still subscribe to today. Polls show that we love “cutting edge” foods that let us keep eating all the things we want without the “consequences” of heart disease, obesity, diabetes, and so much more. 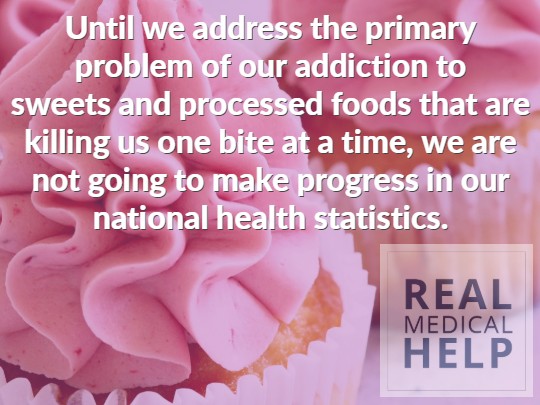 Except we’ve missed the fact that all those things continue to worsen every year.

Every year, more and more of these foods land on market shelves and we’re eating an incredibly high number of them per capital!

In a special report, CBS News called these creations “ultra-processed” – defined as containing several manufactured ingredients that are not generally used when cooking from scratch (including natural and artificial flavors or colors, sweeteners, preservatives, and other additives).

These are often used to imitate the taste, texture, or other qualities of natural foods. Carlos Augusto Monteiro, a professor in the Department of Nutrition, School of Public Health at the University of São Paulo in Brazil, said they’re also intended to, “Disguise undesirable qualities of the final product.”

These foods are usually higher in added sugars, saturated fat, and sodium, which contribute to a wide range of health problems including obesity, heart disease, and diabetes. They’ve also been linked to an increased risk of certain cancers.3

The Not-So-Sweet Effects of Artificial Sweeteners

There are currently several artificial sweeteners on the market that have been approved by the Federal Food and Drug Administration (FDA) for mass production in our food.

A study cited by Harvard School of Public Health found that over an 8-year span, those who consumed artificially sweetened beverages had a 47% higher body mass index (BMI) than those who did not drink them. It is believed that this is because your brain doesn’t register that you’re eating or drinking.5

In other words, it doesn’t curb cravings or “satisfy.” These compounds have the ability to rewire brain function so that you don’t register that you’re really eating ​​​​and no longer connect “sweet foods” to caloric intake.

The distaste for healthy foods because you become conditioned to the hyper-sweetness of these chemical additives is also being noted by scientists. Healthy foods that are naturally sweet taste bland in comparison to sweeteners that are hundreds (and even thousands) of times sweeter than table sugar.

Justifying other sweets or not-so-healthy foods because you’re drinking a soda without calories is dangerous to weight loss goals.

Another fact that is becoming more evident with new studies is that artificial sweeteners have an addictive element that makes them tough to quit.

The manufacturers like to point out that these rats are given large amounts of artificial sweeteners in doses that humans don’t consume and that’s true. Humans don’t consume them all at once. However, we live a lot longer than lab rats and two diet sodas a day equals a lot of these chemicals accumulating in your cells.7

Addressing the Root Cause

Until we address the primary problem of our addiction to sweets and processed foods that are killing us one bite at a time, we are not going to make progress in our national health statistics.

We tend to ignore the negative when it involves things we really like.

Effects of artificial sweeteners on our well-being are one issue among many that we are going to have to overcome to stop getting sick. The alternative is not sweet in the slightest.

Even knowing the well-researched and reported dangers of sugar, many of us still can’t seem to help ourselves when it comes to sweets.They’re delicious, a little bit wicked, and absolutely everywhere.Despite your efforts to eat healthy, control your weight, or manage specific conditions like diabetes, the temptation of sugary treats is hard ...