The Incredible Benefits of Healthy Fats for Your Brain! - Real Medical Help

The Incredible Benefits of Healthy Fats for Your Brain!

There’s so much information in the news about the benefits of healthy fats. The organ in your body that gets the most from them is your brain.

The Painful Facts about Dementia

The World Health Organization (WHO) estimates that 47 million people suffer with dementia around the globe. They project that number to reach 75 million by 2030 (13 short years away!) and 132 million by 2050.1

As the sixth leading cause of death, dementia (specifically Alzheimer’s) is considered a public health priority but should probably be upgraded to a public health crisis.

The United States alone spends over $800 billion per year treating and caring for patients with dementia. As the cases rise, so will the financial needs.

That doesn’t even take into account the mental and emotional toll on caregivers (most often family of the patient). In 2014 alone, these caregivers provided almost 18 billion hours of unpaid care and have incredibly high instances of depression and stress.2

According to the Alzheimer’s Association, “Dementia is not a specific disease. It's an overall term that describes a wide range of symptoms associated with a decline in memory or other thinking skills severe enough to reduce a person's ability to perform everyday activities.” 3

Dementia is debilitating, terrifying, and overwhelming for the patient as well as their loved ones.

Currently, Alzheimer’s disease accounts for between 60-80% of all dementia cases with vascular dementia (which occurs following a stroke) the second most common form with 10% of cases.4

The term “senility” (or “going senile”) gives the false impression that decline in brain cognition is a normal part of the aging process. That is not correct.

There are an estimated 524 million people over the age of 65 currently on our planet. At this time, approximately 47 million of those people have signs or a diagnosis of dementia.

While horrific, that only represents around 9% of their age demographic. Statistically, that means dementia is not a result of aging...but a side effect of something else.

Are You Starving Your Brain?

The benefits of healthy fats are finally making headway in the medical community that rejected them for almost 40 years. Fat was stripped from our diets – replaced with chemical additives and flavors (as well as lots of sugar) – and the ripple effect has been massive. 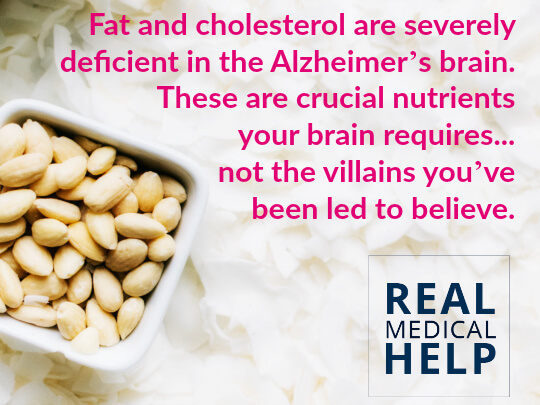 Removing fat was supposed to “prevent heart disease.” It did no such thing. There are now epidemics in heart disease, diabetes, and obesity in the United States along with far more cases of dementia than ever before in human history.

There is currently no cure for Alzheimer’s and until the last few years, doctors didn’t really know what caused it in the first place. However, new research is helping scientists figure out why this mental degeneration is occurring to so many patients at rates never seen.

A big part of the problem is a deficiency in fat. Specifically, not enough of healthy fat benefits to feed the human brain what it needs to function.

Even the staunchest supporters of the “low-fat craze” are starting to connect the dots between the drastic changes that occurred to the Standard American Diet in the 1980s and when damage to brain tissue started appearing in otherwise healthy adults.

Dementia results when there is damage to the cells in your brain that impairs the ability for the cells to communicate with one another. The effects of this communication breakdown may be slight at first and gradually worsen.

There may be ways to prevent the death of healthy brain tissue. There may even be ways to slow further damage. The key lies in the benefits of healthy fats.

Recent studies found that fat and cholesterol are severely deficient in the Alzheimer’s brain. These are crucial nutrients your brain requires (and not the villains you’ve been led to believe).

Your brain is about 2% of your total body mass but uses a whopping 25% of the total cholesterol inside you to maintain brain function. The brain of the Alzheimer’s patient is no longer able to process glucose (carbs and sugar) for fuel. The starved cells begin to die.

Since glucose is the primary source of energy, you must find an alternative fuel.

Ketones are a special type of high-energy fuel created by the liver when the body burns through fat stores. When glucose levels drop, the body steps in and increases ketone production (made by your liver) as an alternative to glucose.

Ketone production only increases when carbohydrate intake is very low. Ketogenic diets have been effectively used to treat epilepsy for almost 100 years. Using it to treat other diseases isn’t a long reach.

Following these general guidelines, your body will respond by entering a state called ketosis. The foods that work best are inexpensive and readily available in most local grocery stores

What if you know you can’t follow something so restrictive?

Coconut Ketones to the Rescue

The saturated fat in coconut oil is composed of 65% medium-chain triglycerides (MCTs). What makes MCTs so special is that when they are ingested, they are rapidly absorbed and converted into ketones regardless of blood glucose levels or the amount carbohydrates present in the diet.

Simply stated, coconut oil provides ketone bodies for fuel that the brain can use quickly no matter what the rest of your diet looks like!

The journal Neurobiology of Aging found that the administration of medium-chain triglycerides (MCTs), the primary fat in coconut oil, almost instantly improved cognitive performance in older adults suffering from dementia. This improvement was seen within 90 minutes after a single dose of three tablespoons.6

Yes, it goes against everything you’ve been told. However, the long-term effect of eating a low-fat diet cannot be denied. Dementia is one of many epidemics mankind is dealing with. Most researchers around the world agree that our health is directly related to the degradation of our diet.

Dementia isn’t an “aging” problem, it’s a “no fat” problem, and you can work to fix it.

Your body really, truly needs rest. Allowing your body to get much-needed sleep benefits you now and well into the future. Research has shown that sleep deficiency substantially raises your personal risk of heart disease, diabetes, obesity, mental disorders, and premature death. 1Chronic sleep deprivation affects more than 40 million adults in the ...